What a great album cover. Rough. Dark. Real. It’s just Barry at the microphone, a close-up shot of what looks like a pained expression on his face, his long hair blending in with the darkness that surrounds him. There are similarly impactful photos on the back and inside of this gatefold cover. The artwork gave us a clue that this was an inspired collection of songs that not only celebrated our hope in Christ but also acknowledged the darkness of our broken world and the need for sincere and authentic repentance.


Lighten Up, Barry McGuire’s second album release after surrendering his life to the Lordship of Jesus Christ begins by hearkening back to an earlier time. The record’s first track is a slow, moody treatment of Barry’s monster hit from the sixties, Eve of Destruction. This acoustic version of the classic protest song features Barry alone at the guitar. 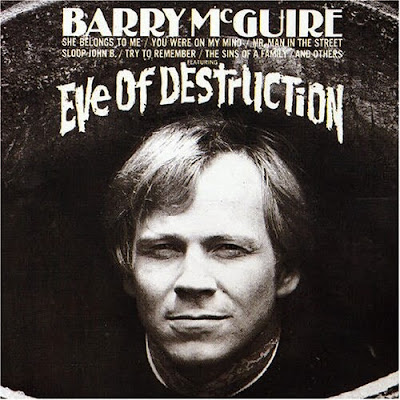 It’s a song that became his claim to fame…and also made ‘Barry McGuire’ one of several possible correct answers to any trivia question about “one-hit wonders in 1965.” It stood as his lone hit radio single, but it was a pretty big one, selling over a million copies and traveling all the way to #1 on the U.S. Billboard Hot 100 chart in September 1965. According to Barry, Eve of Destruction was recorded in one take. He sang while reading the lyrics from a crumpled piece of paper. It’s a depressing song, really, that listed lots of societal problems while offering no solutions. Still, the song reverberated around the world as an anthem for the times and paved the way for McGuire to accept roles in motion pictures (The President’s Analyst, Werewolves on Wheels) and the male lead in the original Broadway production of Hair (opposite Diane Keaton).
By this time, Barry was smoking dope and searching for spiritual truth. He found that Truth in the person of Jesus Christ after an encounter with a Bible translation called Good News for Modern Man. Barry McGuire would never be the same. He had “stumbled into the fullness of Truth,” as he puts it. 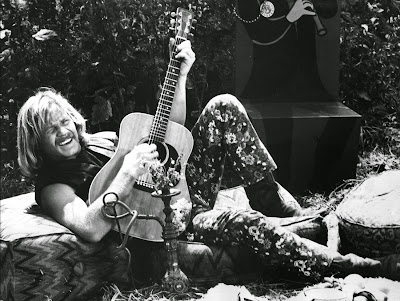 McGuire’s first album as a Christian was Seeds in 1973. It would be another two years before Lighten Up would hit the shelves, leading off with those familiar words…


I can’t believe we’re on the eve of destruction 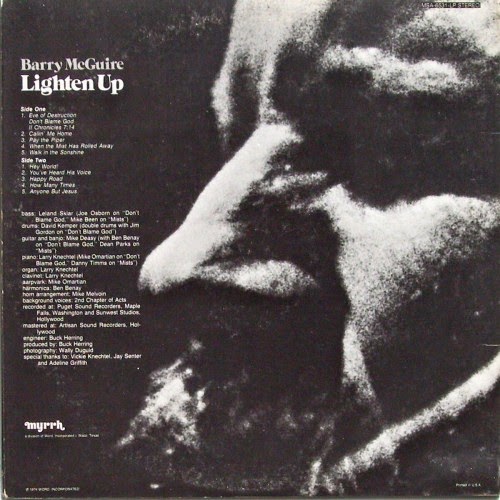 On Lighten Up, Eve of Destruction segues into a rocker called Don’t Blame God, making it clear to the listener that the issues and problems mentioned in ‘Eve’ were a result of the sins of :

On every silver coin and every dollar bill
You see the words “In God We Trust”
But out of fear we kill
Freedom’s just a mockery, communist democracy
Materialistic pleasure slaves lookin’ for another thrill


Wait a minute…isn’t this album titled Lighten Up? 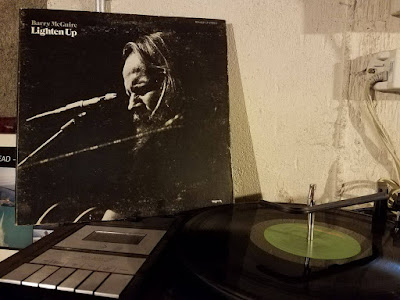 Barry sang this depressing assessment of his country as if his hair was on fire. It was sung and played with urgency and conviction (Ben Benay delivered some blistering electric guitar work, while a young Michael Omartian played piano on the track), but it was every bit as dire and dark as the album’s opener. But don’t despair, friends…help is on the way! The third tune in this opening trilogy was titled II Chronicles and was based on the seventh chapter and fourteenth verse of that Old Testament book:
“If My people, which are called by My name, shall humble themselves, and pray, and seek My face, and turn from their wicked ways; then I will hear from heaven, and will forgive their sin, and will heal their land.” 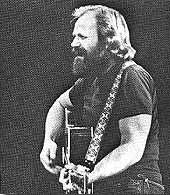 According to CCM historian Mark Powell, McGuire had debuted this suite of songs at Explo ’72 in front of 250,000 Jesus freaks at the Cotton Bowl in two years earlier.
Next up was a song that would become a favorite for Barry’s legion of admirers. Few songs have ever described the irresistible pull of God’s love better than Calling Me Home. Thankfully, producer Buck Herring resisted any urge he might have had to burden the song with lush strings and other instrumentation, allowing pianist Larry Knechtel to provide the perfect accompaniment to McGuire’s gravelly, earnest vocals. Knechtel’s performance on this song was simply exquisite, while McGuire’s singing was authentic and even haunting. Had he sang the song backed by a rock band or even a symphony orchestra, it still could not have been any more compelling. Kudos to Mr. Herring for knowing this.
Pay the Piper is a rocker that reminds us that we will face the consequences of our actions. Larry Knechtel shines again, this time as an organist.
Next, Barry breathes new life into a 19th-century hymn titled When the Mists Have Rolled Away. And wrapping up Side One of Lighten Up is Walk in the Sonshine, a joyful statement of faith penned by Buck and Annie Herring. This song demonstrates the brighter side of Mr. McGuire. Considering the somber tone of the two tracks that opened the album, we’ve traveled quite a distance on the first side of this record! It sometimes is amazing, the ground that he’s able to cover. In much the same way that Randy Matthews and Randy Stonehill could have you laughing one minute and crying the next, Barry McGuire was equally at home with dark, melancholy material as well as upbeat expressions that were boisterous, happy, and just plain fun.

By the way, Lighten Up features a supporting cast of “A list” singers and musicians -- Leland Sklar on bass, drummer David Kemper, Mike Deasy on guitar, the aforementioned Larry Knetchel and Michael Omartian on keys, and the 2nd Chapter of Acts providing background vocals. Produced and engineered by Buck Herring, the album was recorded at Pudget Sound Recorders in , and Sunwest Studios in .
Hey World! kicks off Side Two of Lighten Up. It’s a full-on rocker that serves as a call to sanity. It’s followed by You’ve Heard His Voice, a simple, folk-rock ballad that’s perfectly suited to McGuire’s voice and singing style. The song points out the many ways that God can speak to us and reveal Himself to us:
If you’ve ever walked in a summer rain
Slept where the winds and the snows have came
If you’ve ever known the lonely things
Then you’ve heard His voice
You’ve heard His voice
And you know His name 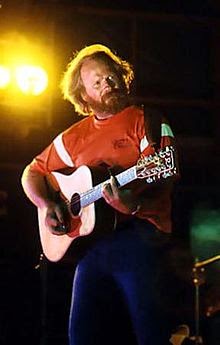 Perhaps Barry’s best known and most loved song from the early 70s is the next song on the album, a simple, upbeat tune called . At first glance, this might seem like just another life-on-the-road song. But it’s really about being happy in Jesus while on the road of life. It became a signature song for Barry. And it’s a classic.
Why it’s a happy road that I’m travelin’ on
I just can’t help myself
You got me singin’ out a happy song
Since Your Son came shinin’
I know it won’t be long
Until Your happy road is takin’ me home
I been out on the highway for thirty-nine years
Somehow it seems like just a day
I’ve seen a lot of heartaches
I’ve shared a lot of tears
But then You came and took them all away 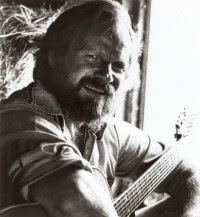 Barry delivers another convicting vocal performance in How Many Times before closing the record with what one reviewer called “a joyous romp” – Anyone But Jesus. This track would be another signature song for Barry McGuire, a rollicking testimony song about just how much the Savior means to this former hippie turned Jesus Freak:
Once I lived in darkness
I’d chosen not to see
Then Jesus came into my life
The Truth, to set me free
But in my fear I tried to hide
My Lord called me to His side
I threw away my foolish pride
And now I know why Jesus died
I’m not gonna think about
I’m not gonna talk about
I’m not gonna sing about
Anyone but Jesus
Later in the song, the quintessential evangelist turns his attention to those who haven’t yet surrendered their hearts to the Lord…
So if you’re living in darkness
And cannot see the light
And everything you try to do
Ain’t nothing turns out right
Won’t you take a tip from me, my friend
It’s getting closer to the end
Just take the Master by the hand
And then you’ll understand
I’m not gonna sing about
Anyone but Jesus


And that wraps up our look at one of the landmark projects of Barry McGuire’s music career. The lyrics are insightful, the playing superb, the emotions raw and real. Who would’ve thought back in 1965 that the angry, gravelly-voiced young man who sang passionately about doubt and destruction would become a hairy, lovable, folksy Jesus freak with a big smile and an even bigger voice? 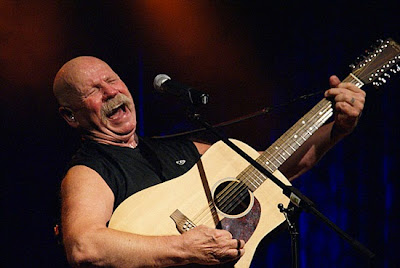 Barry McGuire is still singing, if on a limited basis due to age and health concerns. He does solo dates here and there, but mostly sings with an oldies review called “Trippin’ the Sixties.” It’s a show dedicated to the folk songs and pop music that was popular in the 60s, with a Christian song thrown in every now and then. So these days, his pledge to never sing about anyone but Jesus seems to have been broken. But he’s doing what he loves with friends of his and having a blast. Barry McGuire is still on that “happy road.”

Posted by Scott Bachmann at 5:40 AM